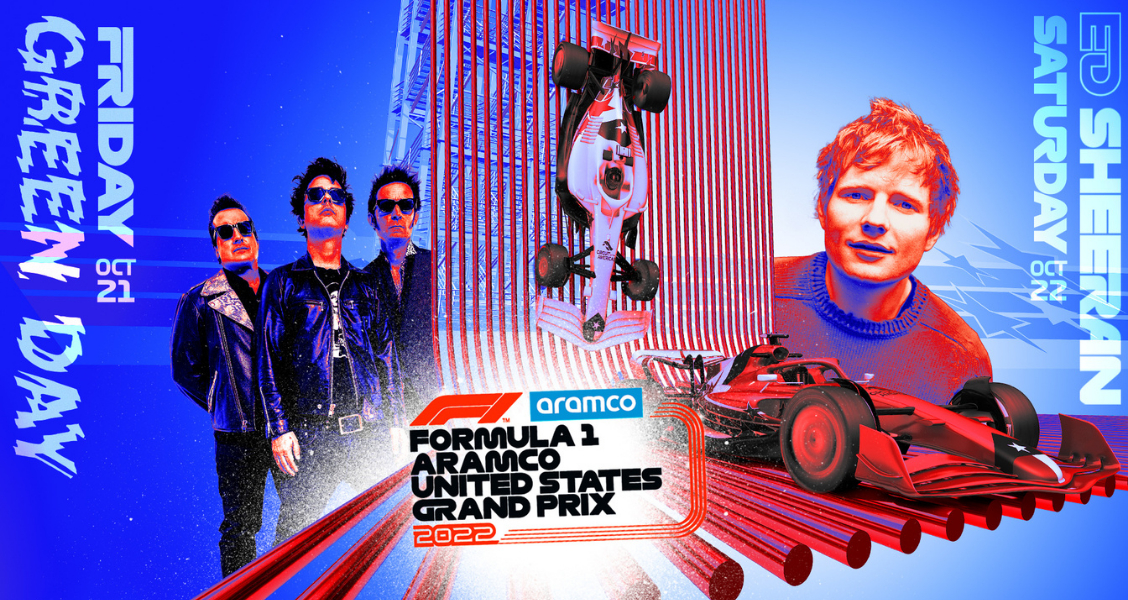 “These superstar performers are for the fans, as the tickets are already almost sold out. We want the United States Grand Prix to be the greatest sports and entertainment event, along with the best ticket value, in the world,” says Bobby Epstein, COTA Chairman. “With 20 other bands, these headliners round out a spectacular weekend festival of racing, music, camping and fun.”

Green Day, one of the world’s best-selling bands of all time, will perform their chart-topping hits from the past 30+ years including “Basket Case,” “American Idiot,” and “Boulevard of Broken Dreams.” The band has more than 70 million records sold worldwide and 10 billion cumulative audio/visual streams. Their 1994 breakout album Dookie, which sold over 10 million and achieved diamond status, is widely credited with popularizing and reviving mainstream interest in punk rock, catapulting a career-long run of #1 hit singles. Entertainment Weekly calls Green Day, “The most influential band of their generation,” while Rolling Stone attests, “Green Day have inspired more young bands to start than any act this side of KISS, and that doesn't seem to be changing.” After debuting their GRAMMY® Award-winning (Best Rock Album) album American Idiot in 2004, a stage adaptation of American Idiot debuted on Broadway to critical and commercial acclaim in 2010. Released last year, Green Day’s thirteenth studio album Father Of All... (Reprise/Warner Records) debuted at #1 on Billboard’s Album Sales Chart and #1 in both the U.K. and Australia. Pitchfork declared, “Green Day’s most fetching and youthful songs in ages. The trio sounds reinvigorated, more like hungry newcomers staking their claim.”

Ed Sheeran is an era-defining artist who has sold over 45 million albums and 150 million singles across the world. Through his fusion of thought-provoking songwriting, universal pop and multi-genre influence, his rich tapestry is not only perfectly suited to his audience but it’s something that transcends generations. With five consecutive UK No.1 albums to his name – ‘+’ (2011), ‘x’ (2014), ‘÷’ (2017) and ‘No.6 Collaborations Project’ (2019) and ‘=’ (2021)– the Suffolk-raised recording artist has resonated with fans across the world through his peerless songcraft and versatility. Sheeran continues to reaffirm his status as one of the most in-demand pop stars on the planet. His latest LP has seen him take home 2 x EMA’s for ‘Best Artist’ and ‘Best Song’; an American Music Award for ‘Favorite Male Pop Artist’; British GQ’s ‘Solo Artist of the Year’; 4 x Los40 Awards; a BRIT Award for ‘Songwriter of the Year’ alongside a nomination for ‘Song of the Year’ at the 2022 GRAMMY’s. Most recently, Ed scored another feat with the Official Chart Company after becoming the first British Solo Artist to claim 52 weeks – an entire year – at No.1 on the Official UK Singles Chart, with only Elvis Presley and The Beatles achieving more overall weeks at the top.

Concert Upgrades: Super-fans of Green Day and Ed Sheeran can purchase concert ticket upgrades, featuring add-ons allowing access to stand in front of the stage on the track itself – the best views in the house! Concert upgrades are available at check-out for an additional fee.

On Friday, visitors can watch their favorite drivers take on COTA’s legendary 3.41-mile track for initial practice laps before heading to the Germania Insurance Super Stage to experience Green Day’s electrifying performance. In addition to many fan-focused activations throughout the day, guests can purchase a Saturday GA ticket to catch the Formula 1 Qualifying races and enjoy singer-songwriter superstar, Ed Sheeran. Guests from all over the world can get a taste of what makes Austin the Live Music Capital of the World during The American Soundtrack, a musical showcase of over 20 acts. Additional details about the American Soundtrack to be released.