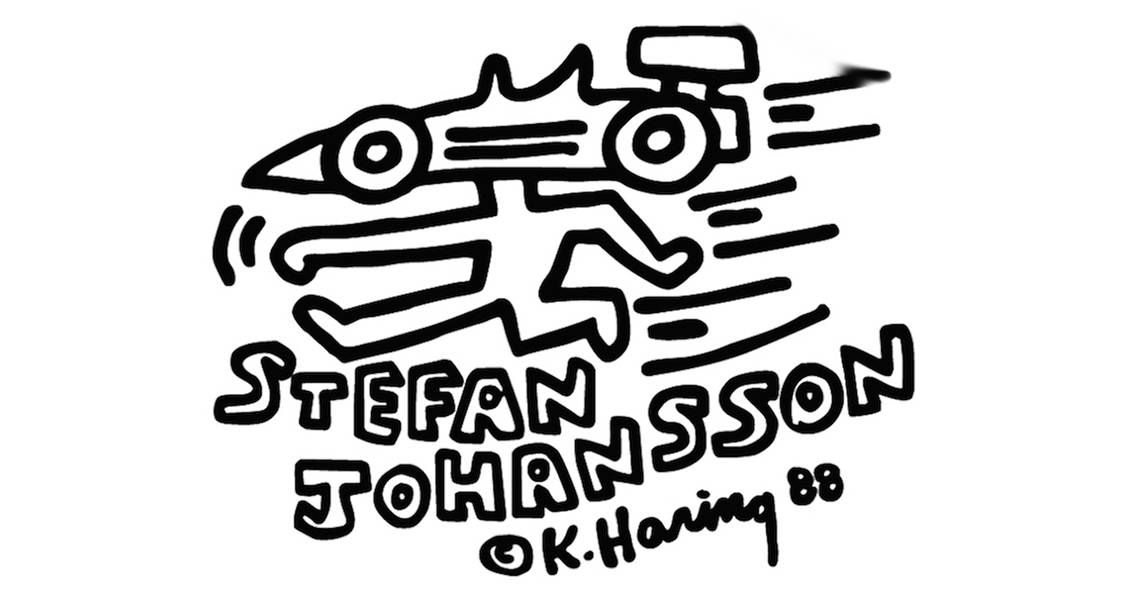 The Driver, The Artist, and Their Illustrated Friendship

For many of us, the artistry of a race car evokes the same reverence as that of a piece of conventional art. Be it a weld or a brush stroke, a poignant piece of canvas fortified with color, or a glimpse of meticulously machined aluminum peeking out from behind a swath of carbon fiber, there are parallels and commonalities between them. Some of us behold the beautiful lines imposed by aerodynamic efficiency the same way we stand in awe of a priceless painting or architectural masterpiece. On the hallowed grounds of Monza or in the inspired halls of the MoMA, our brains are bombarded with the same pleasure cocktail of endorphins and dopamine. The sweet spot of our interests lies firmly at the apex of art and racing.


A few years ago, I was working for iconic racing apparel/equipment manufacturer Alpinestars. Alpinestars has a rich history in motorsports, outfitting teams and drivers in Formula 1, MotoGP, NASCAR, and every other major segment of professional and amateur racing. It was not uncommon to find a former F1 driver’s business card buried in an office drawer. One day as I was sifting through a drawer, I stumbled across a specific card that donned a very recognizable and intriguing graphic. This 3.5 inch by 2 inch piece of plastic suggested that it had a story to tell that I wanted to hear. It was likely a story of art and racing and the aforementioned sweet spot where they collide. It was Stefan Johansson’s card and it was embellished with a personalized Keith Haring graphic. I wanted to know how this came to be and I promptly emailed the address on the card.

The institutions of motorsports and modern art have famously rubbed elbows in the past. BMW has played a significant role in the intersection of art and racing, with their fabled Art Car series. Since its inception in 1975 the BMW art car program has explored the beautiful, aesthetic wonderland that exists between auto design, racing and contemporary art. Art royalty such as Andy Warhol, Roy Lichtenstein, Alexander Calder, David Hockney–and most recently Jeff Koons–have all projected their artistic vision onto some of BMW’s most storied machines. Bavarian motor masterpieces such as the 3.0 CSL, M1, and M3 as well as the V12LMS Prototype have been graced by the brush stroke of BMW’s 40 year old celebration of art and auto.

A lesser known, yet equally interesting fusion of racing and art was cultivated from an unlikely friendship during the late 1980s. Keith Haring had already established himself as an icon and influencer of the Pop Art movement. Stefan Johansson was a dependable workhorse of Formula 1, driving for the likes of McLaren, Ferrari, Tyrrell, and others. He was living in Monaco at the time, already nurturing a passion for art and design. An avid painter himself, he had begun collecting contemporary art, especially gravitating towards the Pop Art genre. As such, Keith Haring’s work resonated deeply with Stefan.

As is the nature of Monaco, the paths of cultural influencers, celebrities, athletes (F1 drivers), artists, and socialites tend to cross. Such was the case when Haring and Johansson found themselves across the table from each other at a dinner hosted by mutual friends.

“I don’t think Keith ever went to a race actually, we met outside the races completely unrelated to anything to do with racing.” Recalls Johansson of their 1988 meeting. “He had no interest whatsoever in cars or racing. We didn’t meet because I was a racing driver and he was a fan of racing, it was more of an organic meeting between people.”

The American artist and the Swedish F1 driver struck up a friendship and mutual respect for each other’s fields of work. Eventually a casual “Hey wouldn't it be cool if...” conversation took place, exploring where they might be able to merge their personalities and talents.

“I can’t actually remember how it came about.”

Said Johansson of the impromptu collaboration.

“I think we just talked about it over dinner one night as it would be a cool idea and then he came up with this design a few days later.”

The “design” is a wonderful, whimsical, and easily identifiable Haring illustration that the artist rendered as a friendly gesture and gift for Stefan. Very few people can say that they own a Keith Haring original piece of art, even fewer can say they possess a bespoke piece that bears their name and identity.

The simple drawing of an F1 man/machine hybrid creature wears trademarks of Haring’s style and pragmatic characteristics. It is enthusiastic. It suggests movement and speed and it evokes personality and character. The casual and playful cartoonish illustration is accompanied by Stefan Johansson’s name scrawled in equally casual hand-drawn block letters. Everything about it yields Haring’s iconic style and carries hints of his history as a graffiti artist, as well as a celebrated fine artist. The piece falls into an interesting space between objet d'art and logo. It is very much evocative of the era in which it was conceived.

The drawing has maintained a rather low profile over the years. Stefan has used it on his personal business cards and letterhead. He’s printed a couple of T shirts over the years, but never tried to commercialize it or use it in an overtly public manner.

The personal nature of the graphic and the fact that it was a somewhat spontaneous gift has kept it protected but possibly under-appreciated. While the simple sketch and text may not be as publicly impactful as say–a 1979 BMW M1 vividly hand-embellished by Andy Warhol–its significance is not lost on Johansson.

“I do reflect on it now and realize it’s a pretty cool thing,. At the time it didn’t seem that big of a deal, but as time goes by Keith’s work has become iconic. I see from the reaction I get from people when they see my business card that it’s something that’s a bit special,” Stefan reflects.

“Keith was a very special and incredibly kind person. Sadly he passed away only a few years after we met, so our friendship was rather fleeting. The fact that he was able to accomplish so much in such few years with his art is a true sign of how talented he was. His legacy in the art world will only become larger as time goes by.”

Stefan Johansson maintains a productive career in motorsports as a driver, manager, and consultant. He also continues to express his art and design tendencies in his paintings and in a fine timepiece company that bears his name. Keith Haring passed away in 1990, but his legacy lives on as an icon of not only contemporary art, but of social commentary and activism. His art resonates as much now with new generations of admirers as it did when he was alive.

While Haring may not have been a rabid F1 fan and Johansson may not have multiple world titles under his belt, their friendship still procured an invaluable anecdote of Formula 1 history. An anecdote rarely recited, but greatly appreciated by those of us who live for that perfect union of art and racing.

To complement this year's F1 USGP, Circuit of The Americas will explore the union of art and racing with POP AUSTIN. The POP AUSTIN International Art Show will host a satellite exhibit featuring an impressive collection of fine art, including pieces from Andy Warhol, Jean-Michel Basquiat, Richard Orlinski, Desire Obtain Cherish, Shane Guffogg, Micky Hoogendijk and others.

The POP AUSTIN track exhibit, located in the Grand Plaza will be a not-to-miss experience and will be available and open to all race goers.

Tickets for the 2015 F1 USGP are going fast. Book yours today. 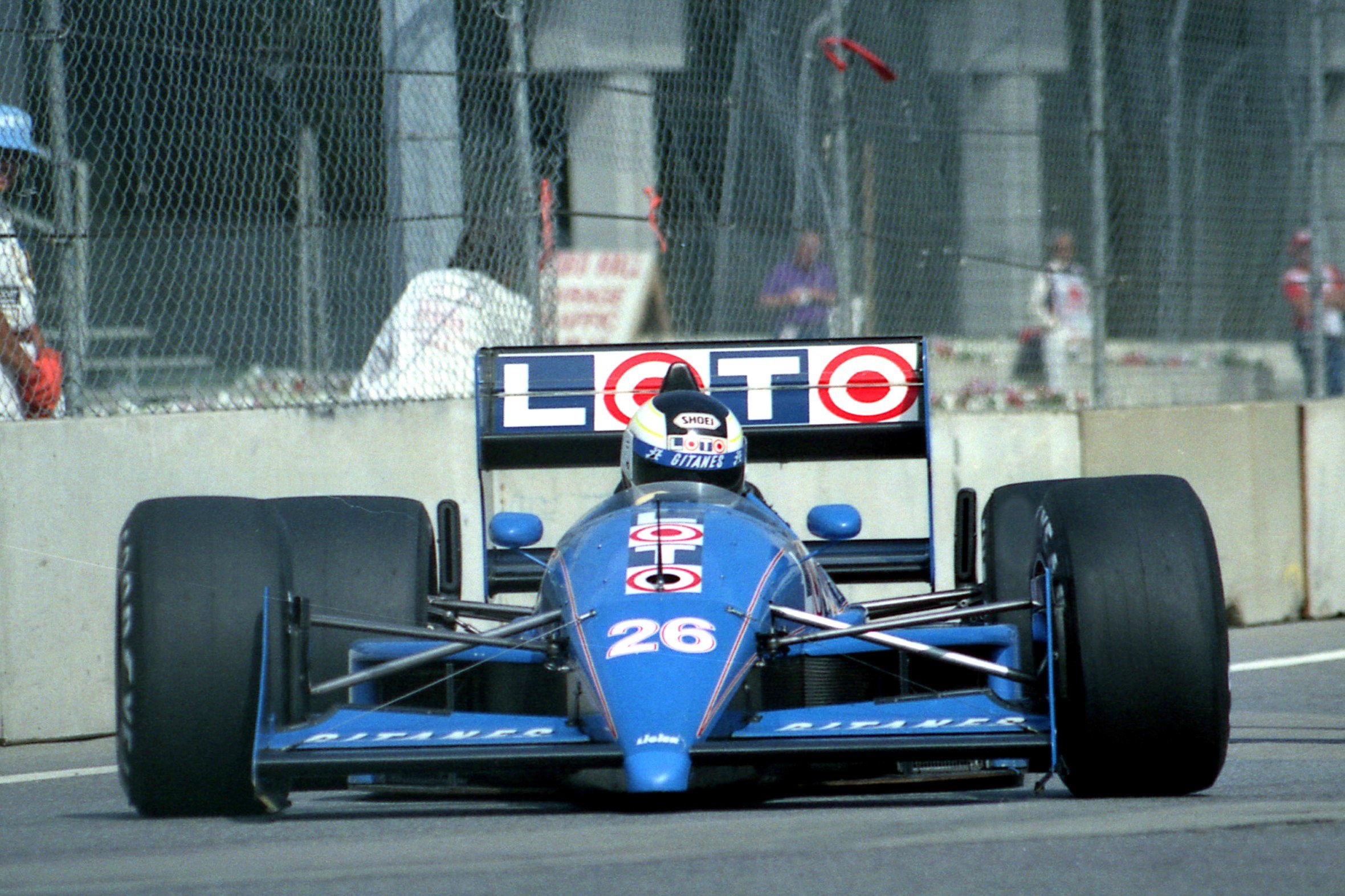 Stefan Johansson at the 1988 Detroit Prix 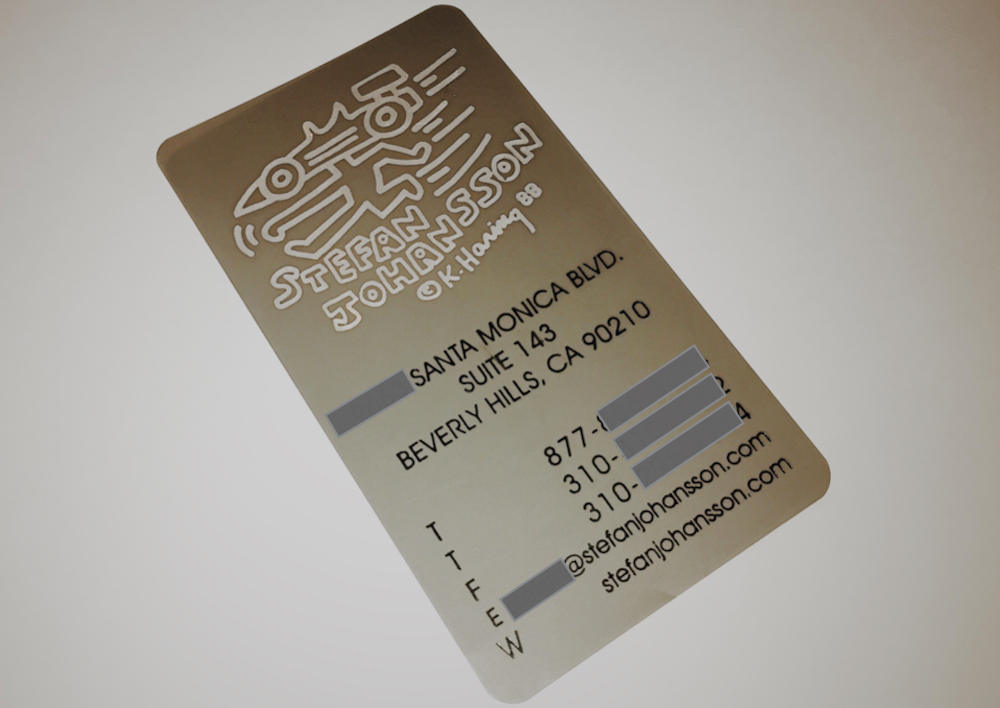 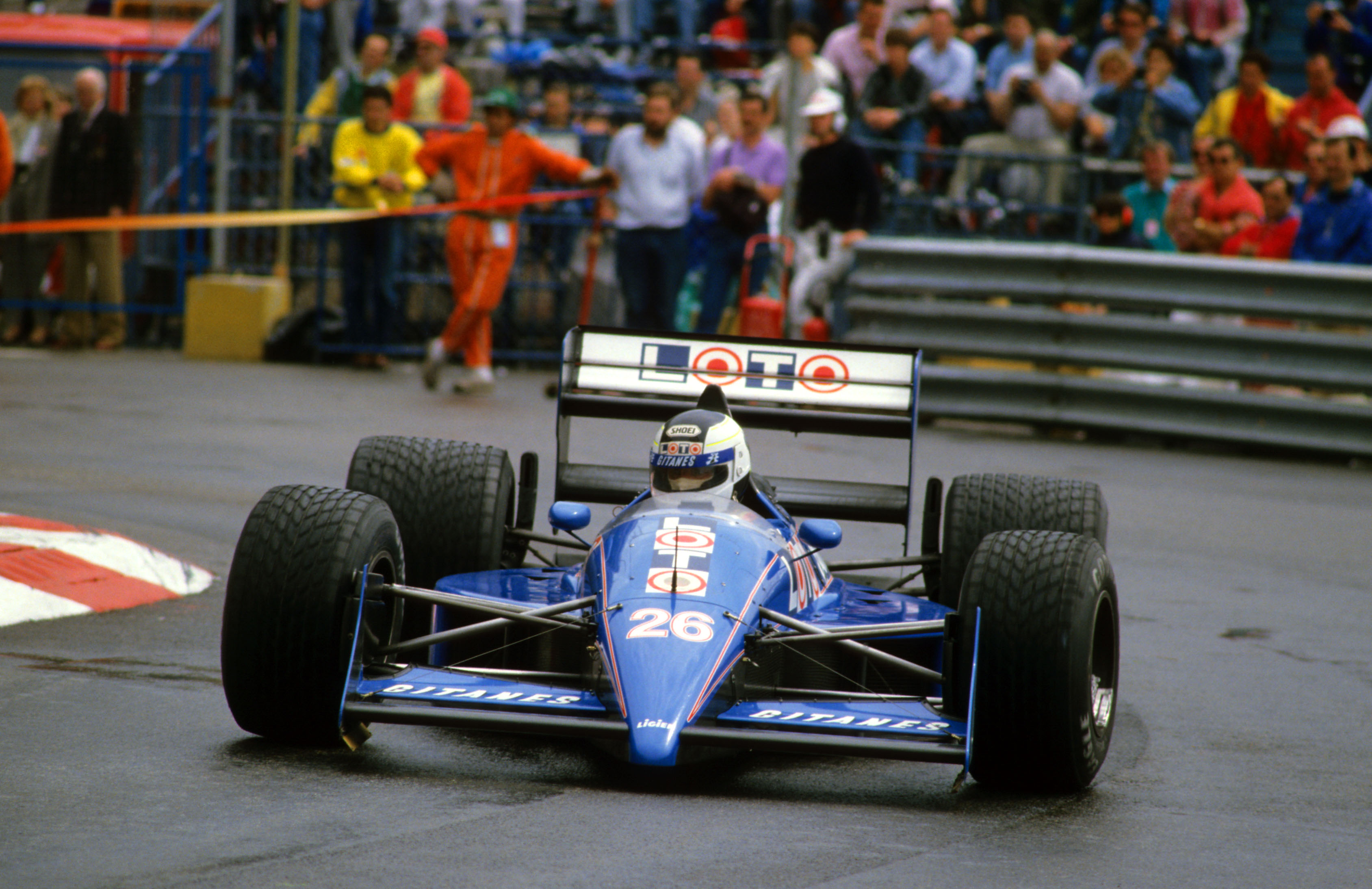 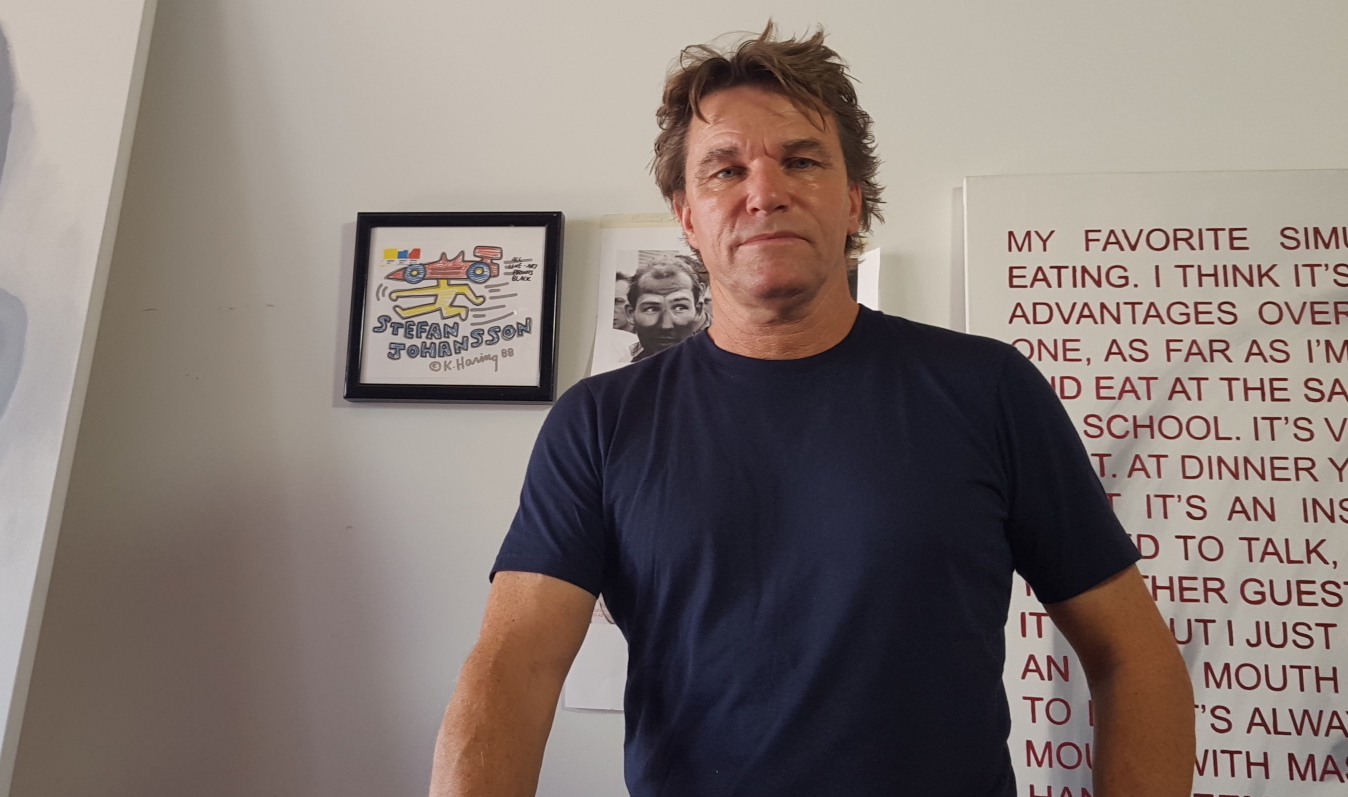