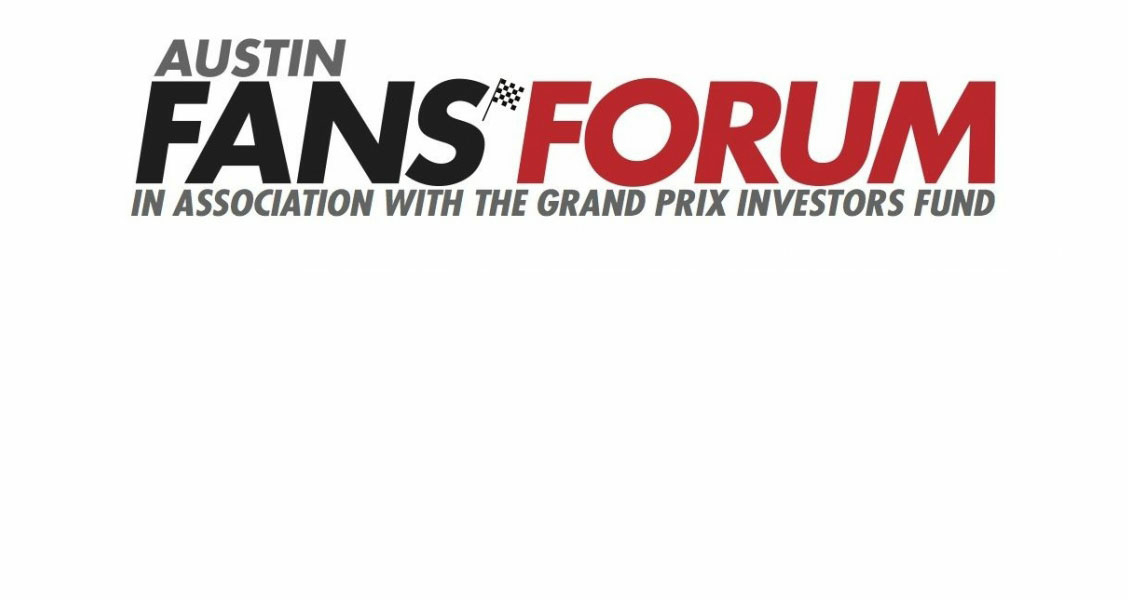 Circuit of The Americas (COTA) and the Grand Prix Investors Fund are delighted to announce an Austin Fans’ Forum on Wednesday, Oct. 29, at the iconic Gibson Showroom in South Austin.

The Fans’ Forum will kick off the festivities around the 2014 FORMULA 1 UNITED STATES GRAND PRIX, scheduled for Oct. 31-Nov. 2 at Circuit of The Americas.

The Forum will feature current and former drivers answering fans’ questions and signing autographs. The full lineup of panelists will be released soon.

The Fans’ Forum is set for 6 p.m. at the Gibson Showroom, 3601 S. Congress Ave., in the Penn Field complex. Doors open at 5:30 p.m. Drinks will be provided courtesy of Tito’s Handmade Vodka, Topo Chico and Shiner Beer. Transportation between downtown Austin and the event will also be available.

Attendance is free, but fans must register at circuitoftheamericas.com/f1/fan-forum. Entry will be first-come, first served. The Forum will be streamed live online and on-demand starting the following day.

Media accreditation requests and queries should be sent to Oliver Weingarten at oliver@owal.co.

Dominic Iacono, Chief Marketing Officer at Circuit of The Americas, said: “We are pleased to be part of this opportunity with Grand Prix Investors Fund to give fans a way to engage with Formula One drivers when the U.S. Grand Prix returns to Austin.”

John Foti, Chairman of The Grand Prix Investors Fund, said: “We are excited to be working with COTA and the Teams on this Fans’ Forum, and to be utilising the iconic Gibson Showroom. Being fans ourselves, we are thrilled to provide this opportunity for the passionate US Grand Prix fans to get closer to the drivers”.

F1; all in one investment vehicle. John Foti, Chairman of Grand Prix Investors Fund and President of the Fund’s advisor Autosport Fund Advisors Inc, is a longtime money manager and F1 Fan. www.gpinvestorsfund.com.

Circuit of The Americas (COTA) in Austin, Texas, is the home of world championships and a world-class destination for premium sports and entertainment. COTA’s marquee event, the FORMULA 1 UNITED STATES GRAND PRIX was awarded 2013 “Sports Event of the Year” by SportsBusiness Journal/Daily, and the same publication named the venue a finalist for 2014 “Sports Facility of the Year.” Additionally, COTA is the new North American home for the summer edition of ESPN’s X Games.  More than one million visitors come to COTA each year for events such as MotoGP™, the TUDOR United SportsCar Championship, the FIA World Endurance Championships, business and social functions, and more than 20 performances at the venue’s acclaimed Austin360 Amphitheater, winner of Pollstar’s “Best New Major Concert Venue” award for 2013.  COTA’s 1,500-acre campus includes a variety of permanent structures, including a 44,000-square foot Event Center, an impressive Main Grandstand with hospitality suites and the Velocity Lounge, a 270,000-square foot Paddock Building with 34 garages, and an iconic 25-story Observation Tower at the heart of the facility. For more information and downloadable video and photos, visit: www.CircuitofTheAmericas.com, www.Austin360Amphitheater.com or COTA’s dedicated FTP site, media.circuitoftheamericas.com. Follow COTA on Facebook at www.facebook.com/CircuitofTheAmericas and Twitter @circuitamericas  and @COTAmedia.