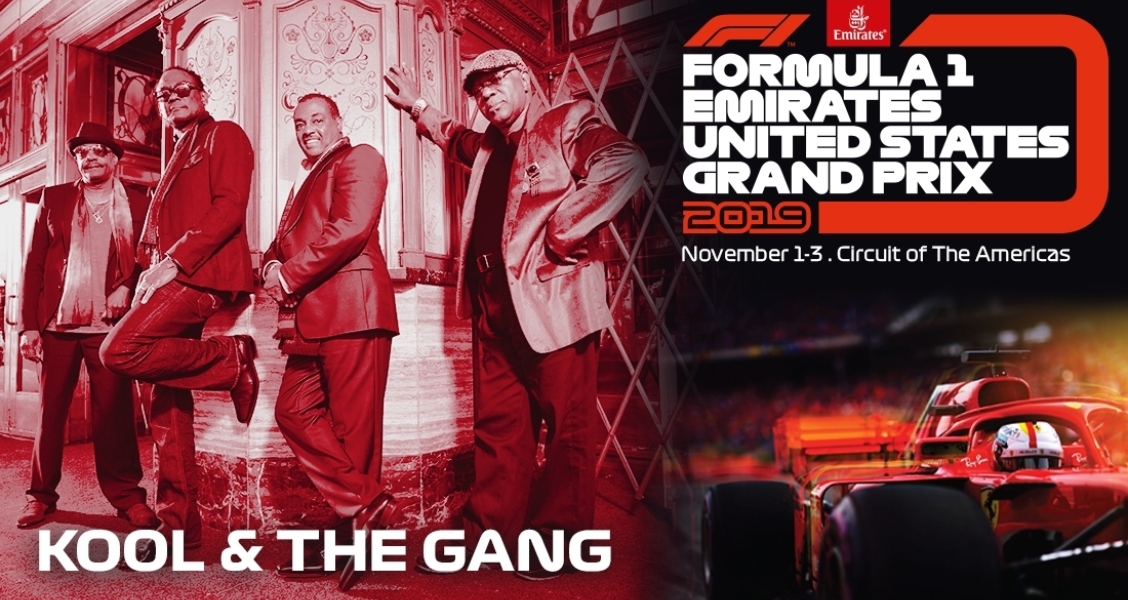 In addition to electrifying performances by GRAMMY® Award-winning international pop icon P!NK and GRAMMY® Award-winning band Imagine Dragons on COTA’s Germania Insurance Super Stage, Circuit of The Americas is adding to the already jam-packed weekend of non-stop entertainment. Glynn Wedgewood, Austin360 Amphitheater’s general manager, explains “Formula 1 USGP weekend is all about bringing the biggest and best names in music to the Live Music Capital of the World, and we are thrilled to welcome the legendary Kool & the Gang to our Formula 1 music roster. From pop icon P!NK and alternative-rockers Imagine Dragons, soul and R&B band Kool & the Gang are sure to end the weekend on a high note.”

From Nairobi to Newark, Kool & the Gang has performed continuously longer than any R&B group in history, and their bulletproof funk and jazzy arrangements have also made them the most sampled R&B band of all time. Thanks to iconic songs like “Celebration,” “Cherish,” “Jungle Boogie,” “Summer Madness,” and “Open Sesame,” the band has earned two GRAMMY® Awards, seven American Music Awards, 25 Top Ten R&B hits, 9 Top Ten Pop hits, and 31 gold + platinum albums. Kool & the Gang celebrated their 50th anniversary in 2015 and have since been inducted into the New Jersey Hall of Fame and had “Celebration” inducted into the GRAMMY® Hall of Fame. Fans can catch Kool & the Gang on the Austin360 Amphitheater stage in the late afternoon near 3:30 p.m. on Sunday, Nov. 3.

The Bright Light Social Hour has evolved significantly since they started as an art rock collective in college in 2004, having toured extensively, including festival stops at Austin City Limits and Lollapalooza. Their songs have been featured in several television shows including Amazon’s “Sneaky Pete,” FOX’s “Brooklyn 99,” CW’s “Riverdale,” and MTV’s “Teen Wolf.” The Bright Light Social Hour will be playing on the Lone Star Stage at 9:30 p.m. on Friday, Nov. 1.

GRAMMY® Award-winning band Grupo Fantasma, who are praised as one of the most important independent acts in the Latin genre, will be entertaining fans on the Lone Star Stage at 9:30 p.m. on Saturday, Nov. 2. The nine-piece collective formed in 2000 in Austin and are now entering their 19th year as a band. The band’s incendiary live show has brought the band to major festivals and venues internationally including Bonnaroo, Austin City Limits, Lowlands in the Netherlands, Kennedy Center, as well as two tours to Kuwait and Iraq to entertain US troops and a recent tour in Pakistan and Qatar.

To learn more about the Formula 1 U.S. Grand Prix at Circuit of The Americas in Austin, Texas, visit: http://www.circuitoftheamericas.com/f1.